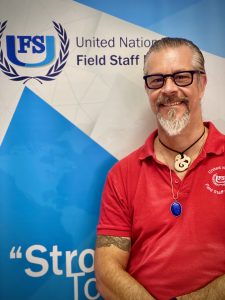 Mark Polane is a Business Relationship Manager who has been serving as the UNFSU president together with Leila and Liliya as his Vice Presidents since September 2019. His last assignment was within the Regional Field Technology Service in Entebbe, Uganda. His United Nations career started in 1992 when he joined the United Nations Truce Supervision Organization (UNTSO) in Jerusalem as a Field Service Officer, (Radio Operator). His career path led him to work in various capacities mostly in Information & Communications Technology but also in Property/Assets management and supply as well as Human Resource management. From ’92 to 2000 he worked in UNTSO, MINURSO, UNPF and UNIKOM, returning to UNTSO, Jerusalem to assume the Presidency of the then called “Field Service Staff Union”, which under his leadership was expanded to incorporate a representation of all International Staff in UN Peacekeeping, thus becoming the Field Staff Union. After completing two terms in office he returned to work within the ICT sector and subsequently worked in UNTSO, Jerusalem, UN-Headquarters, New York, UNGSC, Brindisi and finally UN-Entebbe, Uganda. He holds a Master’s of Science degree in International Management from the University of Liverpool.

Mark is passionate about Leadership, Technology, Human Rights and equality. He also has a passion for lifelong learning and is an avid reader. He has served on countless FSU Committees in various capacities championing staff causes throughout his 27-year career in the UN. He is a skilful negotiator, mediator and writer. He has an innovative mindset and a big picture vision. He is philosophical and has a keen understanding of right and wrong, ethics and integrity, and communicates his thoughts and convictions clearly and passionately.

Mark is a citizen of the Netherlands, born in Belgium to two Dutch Parents. He grew up in a very small village in the rural Netherlands. He speaks fluent English and manages somewhat in Spanish, Italian, Hebrew and a little bit of Arabic. As a young man of 16 years, he joined the Royal Netherlands Navy, which charted his International adventure. He is happily married and has two adult step-children and a 20 years old son.

He intends to lead the FSU by example, emphasizing integrity, honesty, and steadfast staff representation for all UN International staff working in UN Peacekeeping. He hopes to bring innovative solutions that are mutually beneficial to staff and the organization. 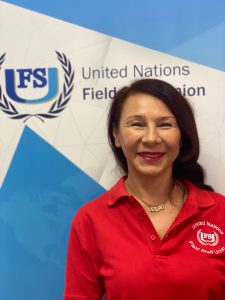 Since the early stage of my career, following graduation from Gorky State Linguistic University in Russia, I worked with international organizations including the World Bank (1992-1993) and American Council of Teachers of Russian (ACTR), an American NGO under the auspices of the program of the Bureau of Educational and Cultural Affairs of the United States Department of State. I was proud to contribute to the development of my city of Nizhniy Novgorod (by the way the town hosted Football Cup 2018 in Russia) while working on World Bank projects of upgrading public transport, finance and housing systems. Even more interesting and gratifying time was when I worked for ACTR (1993-1998), dealing with exchange programs for students and university professors. Simultaneously, I pursued my Law Degree at Gorky State University. Later, I became an exchange student myself and received Edmund S. Muskie Graduate Fellowship grant at Harvard University (1998-2000). That was an exuberant time and place, where I met the most extraordinary people and was exposed not only to academic minds and souls but also to passionate and dedicated people from all over the world. That was the main virtue of being a student of Kennedy School of Government, my second Alma Mater.

After Harvard University, my era of UN has begun and continues still. In the year 2000 I joined the UN Peacekeeping mission in Kosovo, following the establishment of UNMIK by SCR 1244 in 1999. Being a Civil Affairs Officer, I was privileged to work on different projects and in different locations of Kosovo, starting from central Kosovo, through the North Mitrovica region (engaged in post-conflict reconstruction, humanitarian assistance, and local capacity building through democratic elections) and continuing in the West of Kosovo, where I was serving as the Head of Field Office dealing with non-majority issues, cultural heritage, returns and ad hoc security incidents affecting non-majority communities. It was a very challenging and interesting job, which was completely fitting my personality with the cornerstone being assisting the vulnerable. Being part of local government structures, I learned local languages (Serbo-Croatian, and I was halfway with colloquial Albanian) additionally to my English, German and rusty Spanish. Italian is also progressing well. Currently, I am an incumbent UNFSU VP since 2019 and my two-year tenure coincided with the CoviD-19 pandemic and the challenges of adjusting to the different modes of work and representing the international staff in field missions as UNFSU VP.

My personal challenge was to raise up my son and an orphan nephew, being a remote-control mother and aunt. They both are over thirty now and they are on the right track. Recently I became a grandmother of a beautiful granddaughter Ekaterina. Life goes on.

To experience travelling adventures, seeing new places, meeting new people, learning new languages is my passion. My second passion is sports. Pilates keeps my mind and body in sanity shape. Bicycling and hiking allow me to learn the beauties of the local nature.

In 2006, I was elected as Vice-Chair to FSU Council in UNMIK.  And I have faced many challenges since that period including the difficult downsizing process in 2012-2013, when UNMIK FSU pushed the mission leadership to accommodate downsized staff to different missions, by writing a letter to the incumbent SG, Ban Ki-Moon. Another great success, which UNMIK FSU achieved under my leadership and assistance of Global FSU in 2018 was a review of the Hardship classification of Duty Stations, Pristina and Mitrovica, which is in effect since January 2019.

During my tenure as UNFSU VP, I was part of the SMC WG on Mobility and Selection, Downsizing, Performance Management dealing with the policies. I helped our colleagues from Haiti mission to challenge the Leadership decision to cut the entitlements retroactively due to Covid -19 and they were successful in winning the MEU cases. Our Team worked on changes in the UNFSU Constitution in order to streamline it with a more progressive way of representing the staff. I also worked on individual cases of the staff regarding Cigna and UN Pension Fund. Our team established legal assistance to our colleagues through the UN retirees working pro bono and helping the staff to prepare cases for the UN internal Justice system. UNFSU Team Future was actively engaged with DMSPC regarding accommodating the downsized staff from closing missions UNAMID, UNOGBIS and Burundi. More than 100 colleagues were placed in different missions and were able to keep their jobs. And it is still a work in progress.

Thus, I am looking forward to being re-elected for another term and represent all UN International Staff in the field missions with pride and dignity and continue fighting for proper conditions of service and compensation for all hardship that our staff is encountering in different missions. 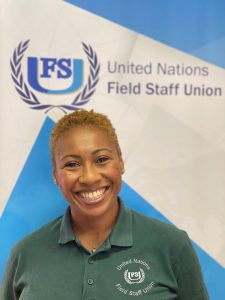 Leila Manly-Spain is an Administrative Officer and one of the incumbent Vice Presidents of the current UNFSU Executive. Her United Nations career started in 2004 when she joined the United Nations Mission in Liberia (UNMIL) as a United Nations Volunteer (UNV). She has since then worked UN Mission in Sudan (UNMIS), United Nations Support Office for Somalia (UNSOS), UN Regional Service Centre, Entebbe until she and her team, Team Future were elected to serve as the UNFSU Executive Team in September 2019.

An accountant by profession, she is also a Certified Training Professional (CTP) and serves as a Peacekeeping Training Officer within the organization. She holds a Bachelor’s degree in Business Administration from the University of Sunderland and is currently pursuing a certificate in Human Resources Management, to empower her to better serve the staff of UN field entities.

Leila is passionate about leadership and staff causes, especially in the field of learning and development. She has served in Field Staff Unions (FSU) committees since 2006 and has been successful in championing various staff causes. She is an avid trainer, specializing in UN competencies and other human (soft) skills. Leila is known for her energy, zest for life and ability to be frank and genuine.

Leila is a Guinea Bissau national, born in Egypt, to diplomat parents and consequently grew up in Russia, the United States, The Gambia and the United Kingdom. She is fluent in English, Portuguese Creole, English Krio, and Wolof. She can also get by in French, Spanish and Italian. Being a product of a multicultural upbringing, she is always open to new experiences and is highly respectful and appreciative of cultural dynamics and diversity issues.  Leila is married with three children.

Leila is driven by the belief that no one should ever feel alone in their difficult times and has been known to serve all staff (international and national), as she truly lives the UNFSU motto, that we are “Stronger together”.

Leila hopes to be able to continue to serve the amazing staff of the UN field entities and to bring her love of life, diversity, leadership and pursuit of excellence to the FSU Executive Body. She is counting on your vote to make this a reality and is wants to say, “Thank you, for the privilege and honour of doing so”. 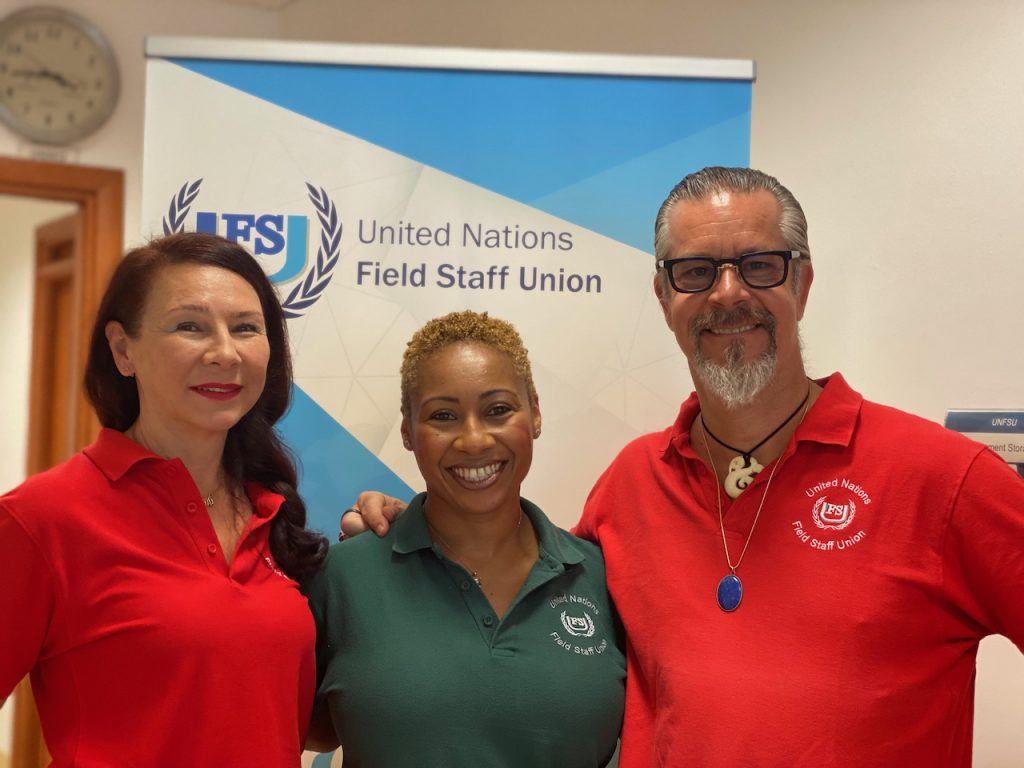